Search for more about radar. 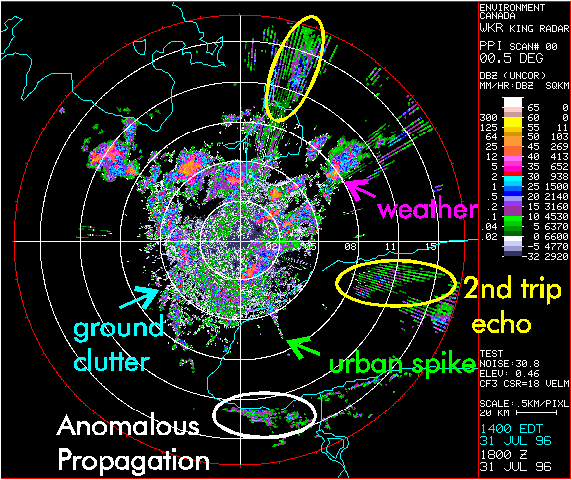 The national radar weather offices employ is an optical instrument, which has problems similar to other optical tools. Issues such as unwanted reflections and refractions (bending).

For instance, fibre-optics work by sending light down a duct of solid glass. None of the energy gets out because the sharp changes in density, index of refraction, and the curvature at the boundary result in total internal reflection. We end up with a very efficient medium.

In other cases, though, light escapes where we don't want it to and efficiency is compromised. Stray light may enter or re-enter the system and give false signals as well.

In fact, quite a variety of limitations and artifacts can interfere with accurate radar imagery.

In the first three examples that follow, the same principles can affect the national radar weather data. They then result in effects such as anomalous propagation, AP.

These show up as large bright areas on the animated radar weather display which are capable of dancing around on an animated screen at times. The instrument can sometimes show weather pictures from very far away. Why? Because of reflecting boundaries caused by:

I remember as a kid, listening to Vancouver radio on summer nights in Medicine Hat, a thousand kilometres of mountains away. It worked late at night because of internal reflection from an upper horizontal boundary of this sort.

What may seem ambiguous from the point of view of one radar station will usually show more accurately when viewed from another on the opposite side.

webpage, or take a trip to the Stuff in the Air homepage.