Is there a solution global warming and pollution activists can accept?

Do we need one? We desire a solution global warming protesters can be pleased with because of the scale of the problem and our understanding of it.

We also need to assist industry in their efforts to deal with the dilemma, or else the whole idea will be rejected on the grounds of economic infeasibility.

There has been great debate over global warming. It's something we need to address carefully and thoroughly.  Why?  Those of us who live in higher latitudes might find the whole idea quite appealing.  That is, if we look no further than our own backyards, so to speak.

The rest of the world has greater problems.  They concern us all.  By hindering their ability to produce for us and trade with us, we are shooting ourselves in the foot in the long run.

Many people have been involved in coming up with viable solutions to this alarming and controversial global warming problem.  They include  scientists, corporate executives and representatives, government officials and rogue activists.  We’ve seen them working together and in opposition to each other (sometimes simultaneously), developing models and other decision making tools to arrive at an ideal solution global warming problems require from us.

Agreement has its practical value, but bear in mind consensus does not necessarily equal fact.  The starting point of problems, factual data, needs to be handled fairly and objectively.

It just might be more appropriate to have a group of solutions, each handling a specific component of the problem. Each part of the global ecosphere contributes to the balance of the earth with those things on it, and in some circles, this is known as the Gaia Hypothesis.  Most would agree, for instance, that anything that preserves or restores the tropical rainforests has to help.  These forests have been an important stabilizing component for our world ecosystem and their disappearance may lead to unexpected results.

Maybe Kyoto is it; maybe not. The Kyoto Protocol to the United Nations Framework Convention on Climate Change is an international agreement. It attempts to provide a framework by which we can define climate change and reduce industrial green house gas emissions believed to cause global warming. 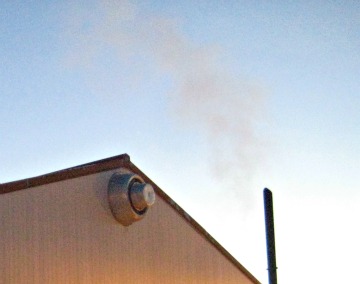 Can it lead to a diminished effect on global warming and air pollution or provide smog solutions without crippling our economic foundations?  Maybe...if the proposed methods of controlling mankind’s effects on the atmospheric environment were and continue to be the real solution.  This might work if all nations were on board. Maybe not, if something else causes global warming.

Some major players never participated and one example, Canada, dropped out partway into the program.  Maybe they had valid reasons to so do.  See more about the Kyoto Protocol towards the bottom of this webpage.

If you need a brief definition global warming is the increase of our planet temperatures we have seen in recent decades.  It is believed this trend may continue, according to popular future predictions.

Is this real global warming evidence? We've seen parts of polar ice caps floating away and expect to see flooding from rising sea levels.  There are many global warming statistics, images and comics all over the media including the web, each expressing an opinion and/or presenting a small facet of factual data.

Here’s a chance to see some air pollution statistics charts. Suffice it say that the average earth temperatures have risen by as much as 1 degree Celsius (1°C) in recent global warming history and it could increase further. Nobody knows why for sure. Well documented causes include anthropogenic emissions to the atmosphere, sunspot activity and the Milankovitch Cycles of planetary motion.  Each may play a role; how large of one is still uncertain.

The warming is the concern, and the solution global warming-reduction supporters demand gives stopping the warming top priority.

Others say that "globle warming is not really a problem" and that it is easily within the range of natural fluctuations the planet has seen throughout its life cycle. They add that the combination of geological and meteorological forces is largely a repeat of previous changes our ancestral planet has undergone over millions, even billions, of years.

The British Broadcasting Corporation television network, the BBC, has provided a unique point of view on the subject. And so has Al Gore's film An Inconvenient Truth and the IPCC Fourth Assessment Report released in February 2007, as well as subsequent reports.

You know who has the most hilarious (and insightful) Solution Global Warming thoughts?  George Carlin - check this out.

As usual, Carlin is NSFW.

What are your thoughts on this global warming thing? Say it on the air, figuratively speaking, and people will read it on this website. Or if you have a cool picture to share you can...

Educate our Kindergartners and Primary school children for Sustainability.

Thank you for showing all of the ideas and groups involved within this serious issue, but one group that has been left out are children who are 12 and …

Anything that filters the smog coming from cars, trucks, trains, and industrial pollution is a plus. These things need to be addressed ASAP and, over …

There is air pollution killing our once beautiful views. This is smog over the valley. That's about 40 miles to the top of the distant mountains. …

internet and the environment

Infographic by WordStream Internet Marketing Software Barry's Response - Thank you Chris for this infographic. My readers will find it quite …

the solutions to global warming

The solutions to global warming Barry's Response - They're all listed here, aren't they. This diagram, commonly called a mind map, covers the classic …

Think about global warming and the animals: These people did.

future Barry's Response - I've seen the future. And the future is Photoshop. For those of you who would have to look it up, like I did, the Eiffel …

It is a crime that you are continuing to perpetrate this hoax. It has been conclusively shown that the climate warming/climate change is just an attempt …

Why not take drastic steps in reducing vehicle exhausts?? The government should implement a deadline in exchanging our cars for fuel-cell powered cars …

The global warming is making many effects, like the ice is melting and the polar bears are dying 'cause they get tired when they swim and there is nowhere …

I am an expert on meteorology and severe weather and have been for more than 15 years. My research has really just begun on global warming but I have learned …

It is -28 C here right now, and this is a warm day. Don't talk to me about global warming. It's a religion, it is all theoretical, with plenty of evidence …

The Global Warming Myth Not rated yet
If carbon dioxide is causing warming of the planet, very slightly, then what a good thing that is. Let's rejoice in the fact. People in higher latitudes, …

What to think of weather Not rated yet
Your information helped me a lot on a science sheet i had to do. Your website should have more information on radiation and greenhouse gases or the greenhouse …

Not a Hoax Not rated yet
If you have 5 people in a room smoking, the room fills and it becomes harder to breathe, well that's what happening on a larger scale. Just look around …

Global Warming...follow the money Not rated yet
The Earth warms and cools and there is nothing we can do about it. The Utah Salt Flats was a lake as big as Lake Michigan but 13,000 years ago, it …

How to help Not rated yet
Overpopulation, habitat loss and careless use of natural resources affect all life on earth. Buying exotic pets and goods made with animal products threaten …

Short answer: A city on the map of Japan.

So what? An agreement amongst 84 countries was signed there to decrease air pollutants and reduce greenhouse gases in an attempt to decelerate the progress of global warming.

They named it the Kyoto Protocol and this agreement was intended to bring the total mass of numerous types of emissions back to levels more typical of the early 1990's.

This would have formed the beginning of a solution global warming protesters may accept and believe in.  It now has participation of well over a hundred nations with Canada, the United States and a few others excluded.

Does it make a difference? There is a significant portion of the population claiming it would not.

These gases often come from factories, cars, agriculture and other industries and equipment.    Here are some more questions and answers. The Wikipedia page at http://en.wikipedia.org/wiki/Kyoto_Protocol gives you a good detailed introduction to this solution global warming, targets, background and history.

See comments about The Day After Tomorrow Movie.

Global warming is one of the many air quality issues we have; here are some others.

How has that been working?