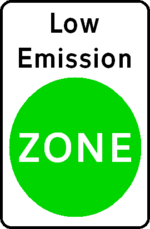 One component of air pollution Diesel emissions comes from trucks, trains, ships and other equipment that burn diesel fuel. Other things that burn these fossil fuels include electric power plants, industrial engines and heavy equipment.

Some of the most insidious of the air pollutants are those that are made up of microscopic solid particles. Why these? Such emissions invade our atmosphere with many such particles, with a large part of them measuring less than a micron in size.

Because they are so small, they can lodge deep in the lungs and stay there indefinitely. So what?, you may ask. Because they stay in the lung, chronic illness can result.

Ever heard of pneumonoultramicroscopicsilicovolcanoconiosis? It's not just the longest word in English, but also the name of a lung disease contracted by inhaling too much silica dust. You won't find much of that substance in diesel emissions but you will find it in the road dust kicked up by big diesel burning trucks. 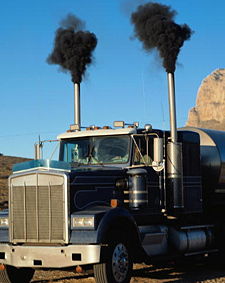 Not this Bad Anymore, fortunately

Of the problems resulting from vehicular traffic, diesel emissions ranks amongst the worst. In addition to the particulates, it contains poisonous gases. Gases such as nitrogen oxide, carbon monoxide, sulfur dioxide, and formaldehyde. Formaldehyde has caused tumors in laboratory animals and scientists even use it as a preservative.

You might be in charge of an industrial operation that uses a significant amount of diesel and might need to conduct air quality modelling to assess the local impacts.  If so, visit the air pollution dispersion modeling web page to see a description of my convenient consulting services.

Do your engines use diesel fuel?  Visit Calvin Consulting Air Quality Dispersion Modelling to find out to reach us for determining the effects of your diesel engines on the nearby environment.

How effective are these emissions as a carcinogen? They were found to cause of up to 70 percent of atmospheric pollution induced cancer cases.

Back to the solid particles. Because of the particulates contained in this exhaust, children and adults who suffer from asthma really feel the effects of this smoke.

In one study, volunteers who allowed themselves to be exposed to diesel fumes reported coughing, sore throat and eyes, headaches, and nausea. Some came down with lung inflammation after exposure.

Other common symptoms included the production of phlegm and difficulty breathing. Of course, people also complained about odors. A perpetual annoyance.

Given the shortage and expense of burning fossil fuels, it would be wise, economically, to reduce our dependence on diesel. And when you consider health implications as well, it would seem like finding alternatives to diesel should become a priority for in the relevant fields of industrial research. Let's see if we can make any improvements here.

Go back from Air Pollution Diesel Emissions to the Solution Global Warming webpage.

We have air quality problems from a wide variety of sources.

See what kind of air pollution these  diesel emissions can contribute and what the problems are.