How do we compare to ancient climates?

Search for more about climate. 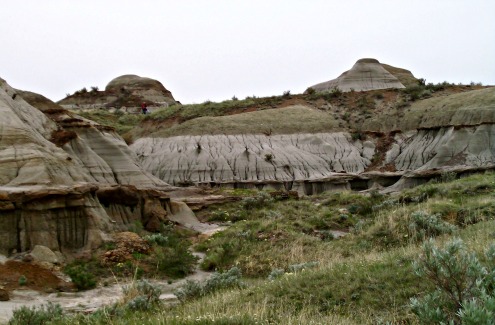 Al Gore has presented us with data for ancient climates spanning about two-thirds of a million years. What if we were to look at a few hundred million years instead? The Phanerozoic eon. That's nearly a thousand times longer than the time span covered in the Vostok Ice Core records document.

Let's start with a few definitions. The earth is more than 4,000 million years old. An Eon is the largest time scale paleogeologists use. Each one covers at least 500 million years. The Phanerozoic eon, which we are part of, started over 540 million years ago.

And then early fish and reptiles came along. Also, during this time, all the land mashed into one continent, Pangaea, and stayed together at least 60 million years.

The next time-scale you'll hear about is a period. Twelve of them cover the last 540 million years and they span from 20 to 60 million years each. Our current Neogene Period began just over 23 million years ago and modern animals, such as horses and birds, appeared then. The smallest group of scales has been called the epochs. And our Holocene Epoch started when the last big glaciers melted and allowed human civilizations to grow, starting at about 11,400 years ago. Before that came the Pleistocene Epoch (aka Quaternary), which includes all of the Ice Cores shown in An Inconvenient Truth, plus more than another million years before that. It totals 1.8 million years, actually. The Ice Age glaciers formed during these ancient climates, and so did something resembling human beings. This is when mammoths and sabre-tooth tigers (and other so-called Pleistocene mega-fauna) lived and died, too.

Find more great ones on this Youtube channel pageSing along if you will.

Over the last 540 million years, the Phanerozoic eon, ancient climates have gone through numerous warm and cool phases, with average temperatures fluctuating from around 12°C up to 22°C. We are presently near 15 degrees Celsius. The Cretaceous Period, 145 to 65 million years ago, had the warmest temperatures overall. Then they fell dramatically into the great ice ages

Going back to ancient climates

The grey bars show the epochs and eras, while the blue graphs above and below provide estimated temperatures for each of the ancient climates specified. Temperatures? Yes, relative to present day globally-averaged annual values.

We are Holocene. This epoch started when the extensive glaciers melted and the temperature became more pleasant than it had been, but still quite cool compared to the planet's history overall.

So let's start with the current temperatures and work backwards. Temperatures have risen by 0.6 to 1.0°C since 1850, which was then end of the Little Ice Age. The Little Ice Age, which started around 1300, had temperatures up to half a degree Celsius cooler than the Medieval Warm Period before that (AD 1000). It was a minor fluctuation, really. Several similar variations occurred throughout the Holocene epoch. The rest of this Holocene period, from 1000 to 11,000 years before present, seemed rather uneventful, climatologically speaking. Paleoclimatology research shows only minor random changes in these ancient climates, except for a sharp cold snap known as the 6200 BC event (which lasted 50 to 100 years). It may be tied to the final draining of Lake Agassiz and even Noah's Flood.

The Holocene began at the end of the Younger Dryas stadial 12,900 – 11,500 years before present (ybp). This was the mini ice age Al Gore talks about; it took place after the Vlad Glacier melted and the fresh water diluted the salt water in the Atlantic, causing the ocean current to stop and Europe to freeze. The Younger Dryas lasted over a thousand years, but not long enough to create a new ice age.

Prior to those ancient climates, we had the Pleistocene epoch. A period marked by many ice ages and ending with the so-called Late Glacial Interstadial melting period from 14,700 to 12,900 ybp. This 1800-year period of warmer ancient climates caused those giant pools of melt-water to form in North America, leading to the flooding that caused the Younger Dryas. The coldest weather of the Cenzoic Era occurred about 22,000 years ago, and that defined the Last Glacial Maximum.

What is an Ice Age?

A period of time with ice sheets and ice caps. We are in one now, and have been for a few million years. Up until about 10,000 years before now, it was colder than it is now and those ice sheets covered great expanses of the planet which are now populated temperate zones. All of Canada, Greenland, New York, Chicago and areas in between had solid ice cover, hundreds of metres thick. The ice caps and sheets become smaller during the interglacial periods, and we are now in an interglacial period of the current ice age.

The Pliocene epoch, 5.3 to 1.8 million years ago, showed signs of the coming ice ages. Antarctica became totally ice covered around 5 million years ago and the Arctic got its ice cap a couple million years later. These ancient climates were definitely colder than before. Possibly the coldest it has been in hundreds of millions of years.

Greenland acquired its first glaciers during the later part of the Miocene epoch, which went from 23 to 5 million years ago. The place had lush forest cover before then. Miocene ancient climates were quite warm compared to now, especially during the mid-Miocene Climatic Optimum 18 million years ago.

Overall, it was about 50 million ybp when the whole world began slowly cooling down. It reached its first minimum in the Oligocene epoch ancient climates and eventually lead to the ice ages of the Pleistocene. The Oligocene epoch, 34 to 23 million years ago, was not as warm as the Miocene which followed, but still warmer than present.

Before the Oligocene was the Eocene epoch, from 56 to 34 million years before present. It was the warmest we've seen in the last 56 million years. But the epochs before that, Paleocene and those of the Cretaceous period (146 to 65 million before present), were almost as warm.

Most of ancient climates of the Mesozoic Era, 251 to 65 million years ago, were considerably warmer than today and the dinosaurs thrived. That era included the Triassic, Jurassic and Cretaceous periods. Long before the Intergovernmental Panel on Climate Change could do anything about it.

These geologists call the first half of the Phanerozoic Eon the Paleozoic Era. It saw dramatic swings between very warm and cold paleoclimate extremes, ending with an ice age that gripped the Carboniferous and Permian periods. These periods collectively spanned 360 to 251 million years ago. Before that time the earth was warmer again, with average temperatures that were warmer than today. We call these times the Silurian and Devonian periods and they went from 444 to 360 million years before today.

Where are we going with all this?

Finally, the first two parts of the Phanerozoic eon are called the Cambrian and Ordovician periods. They started 542 million years ago, lasted a total of nearly 100 million years and ended with an ice age which led to the Silurian Period.

Little is known about the ancient climates in the periods before the Phanerozoic eon, however the strong snowball earth ice age is believed to have had ice covering the entire planet. That was over 800 million years ago.

Search this site for more information now, or go back from Ancient Climates to the Solution Global Warming web page, or visit the Stuff in the Air homepage.