There's no one Canadas climate as we have a few...
With this much territory, you would too...
This page gives a map and descriptions for you...
Enough with the poetry, on with the show.

According to the Intergovernmental Panel on Climate Change (IPCC):

"Climate in a narrow sense is usually defined as the average weather, or more rigorously, as the statistical description in terms of the mean and variability of relevant quantities over a period of time ranging from months to thousands or millions of years. The classical period is 30 years, as defined by the World Meteorological Organization (WMO). These quantities are most often surface variables such as temperature, precipitation, and wind. Climate in a wider sense is the state, including a statistical description, of the climate system."

What does it mean? Anyone's including Canadas climate describes the possible and expected weather for a part of the world, for a given time of year, without the benefit of a weather forecast.

What you might anticipate if you were planning to come to Canada at a certain time next year, for instance. A detailed description would let you know what temperatures you might see, any rain, strong wind or snow on the ground.

The first item to note is that Canada is one of the largest countries in the world. It spans more than four time zones and has land lying from temperate mid-latitudes in its southern border far enough northward to include land surface at greater than 80°N latitude.

That means Canadas climate has many unique components. Several areas, each dominated by its own large influences, such as

One thing that governs Canada's current weather is the so-called air mass affecting a particular region at any given time. Canadas climate experiences the influences of several of these simultaneously. They have names such as maritime-tropical, continental-polar, arctic and so forth, and define the temperature (generalized by the second word in each two-word phrase) and humidity characteristics of a large blob of air over any portion of the earth's surface.

Though they move around, many display quasi-permanent qualities (moving, but not too far) for a significant part of each year. This certainly affects regional climates as well and helps define Canadas climate.

So we know Canada has several climates. Let's look at them by Koppen Climate Classification, an elementary system which draws climatic conclusions by vegetation type and amount. In the southwest city of Vancouver, surrounding coastal regions and islands, they get a Koppen cryptic code of Cfb. The capital C means cool humid air most of the time similar to the climate England has.

The f means no real dry season and the small b means comfortable temperatures in the summer (around 20°C).

Here we have the mildest portion of Canadas climate. The rest of southern British Columbia, east of Vancouver is high mountains with their polar type of climate, called Highland H. This is interspersed with deep, often dry, valleys. The cities of Kelowna and Kamloops, for instance, have Koppen Dfb climates where the D characterizes dry continental conditions: much less precipitation, big day/night and summer/winter temperature differences. The valleys may include some Bsk, scattered throughout.

As you travel eastward, out of the mountains, and remain near the US border, you encounter a large sweeping area of Dfb climates great summers for agriculture, some rain but not too much, and cold dry white winters. This area, especially Palliser's Triangle, is often influenced by the hot US deserts due south of here. It stretches from Calgary climate area into southern Saskatchewan, with the warmest and driest of Canadas climate extremes approaching Bsk (semi-arid grassland steppe: Medicine Hat, Regina) in this region.

To the north and east of this is a cooler, slightly more moist band of Dfb, which includes the humid continental major cities of Edmonton and Winnipeg. North of that is the Boreal Forest in its Dfc climate - short summers and severe winters.

Now for the largest area of Canadas climate. Generally, northern BC, Alberta, Saskatchewan, Manitoba, Ontario and Quebec (The Canadian Shield) as well as parts of Labrador, southern Yukon, Northwest Territories and Nunavut has been assigned the code Dfc (I think it means "Darn friggin' cold!").

It has arctic climates further north classified as ET, tundra. Permanent ice caps, coded EF, occur on Canadian land in glaciers only rather than large sheets like those in Greenland, the Arctic Ocean surface and Antarctica.

Now let's move into the southeastern part of Canada. Surrounding Toronto, the most heavily populated tract with the warmest example of Canadas climate gets the nickname the golden horseshoe. It has some spots with a Dfa climate, especially down south near Lake Erie west to Windsor. This climate has very warm summers and shorter cold winters.

The remainder of southern Ontario including Ottawa is Dfb with Dfc in the north. The Dfb extends eastward into Montreal and beyond along the St. Lawrence River and through Halifax and all the maritime provinces. Here, it is humid with warm summers and cold winters.

Here's how to get detailed Canadas climate information from Environment Canada, enter the name of your city in the second blank on this page. After that, you get expected normal weather conditions for every month and some sense of the variability for that area.

Here are some contour plots showing the climate details for all areas of Canada: 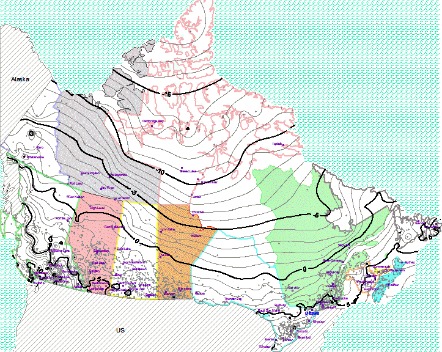 This plot shows the average temperature in degrees Celsius (°C) 24/7 over 365 days for every locale in the country. The data in all these plots was extracted and compiled by Environment Canada and represent the period 1981 to 2010. A larger version of this drawing is available at https://stuffintheair.deviantart.com/art/Canada-Annual-Average-Temperature-527171071 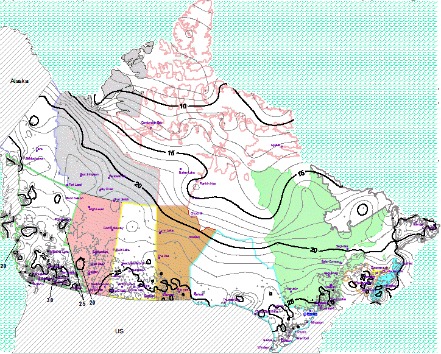 Here is the average daily high temperature in July, the warmest month, for the whole country. Over the course of the entire summer, each place can normally expect to exceed the corresponding temperature on 50 individual days, more or less. Larger version: https://stuffintheair.deviantart.com/art/Canada-July-Average-High-Temperature-527172257 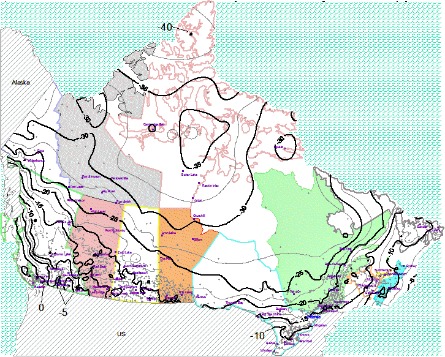 This plot shows the average daily low temperature in January, the coldest month overall, for the whole country. Over the course of the entire winter, each place can normally expect to become colder the corresponding temperature on around 50 nights. Larger version: https://stuffintheair.deviantart.com/art/Canada-January-Average-Low-Temperature-527171848 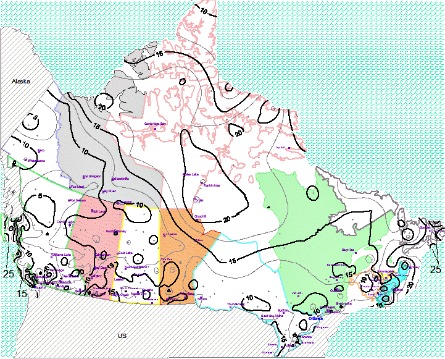 This one shows the average wind speed everywhere, in kilometres per hour (km/h). See a larger version at: https://stuffintheair.deviantart.com/art/Canada-Annual-Average-Windspeed-527174263 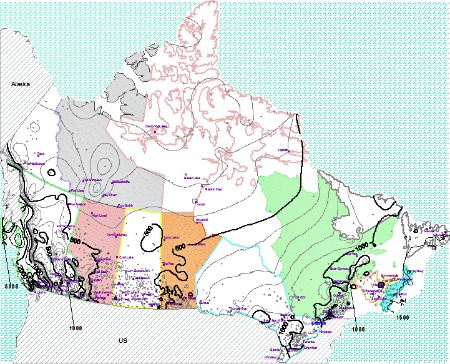 With all rainfall and melted snowfall combined, this plot shows the total precipitation in millimetres for each region. Note how dry the prairies are and how much rain falls in the coastal regions. Larger version: https://stuffintheair.deviantart.com/art/Canada-Annual-Precipitation-527173492

Average Number of Days with Snow on the Ground 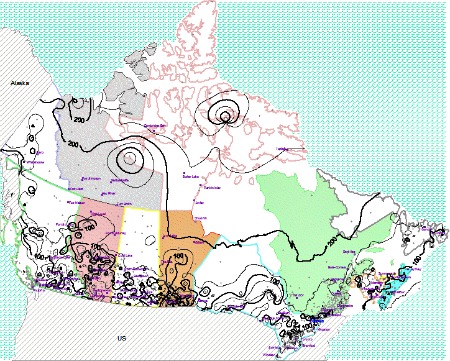 How long are our winters? It varies by location. If you consider winter a time with at least 1 cm of snow on the ground, this figure shows the average number of days per year in which there is that amount of snow and you can use it compare winter durations. Note some spurious data in the Arctic region on this one, but the trend is about right. Much of that area of Canadas Climate has over 200 days per year with snow. Larger version: https://stuffintheair.deviantart.com/art/Canada-Annual-Number-of-Days-with-Snow-On-Ground-527173941

Average Sunshine as a Percent of Daylight Hours 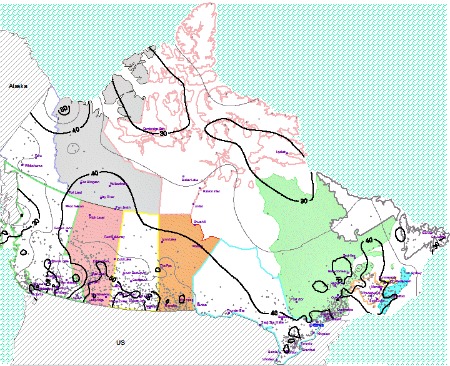 If you like sunshine, you will like the southern prairies. This plot shows you the percentage of daylight hours in which the sun shines brightly. Larger version: https://stuffintheair.deviantart.com/art/Canada-Annual-Sunshine-Percent-527173028 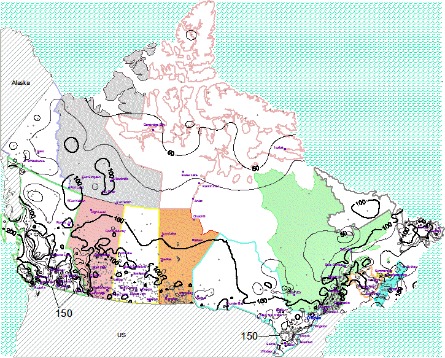 This last one provides the average length of the growing and gardening season for each area. It shows the mean number of consecutive frost-free days per year. Larger version: https://stuffintheair.deviantart.com/art/Canada-Annual-Frost-Free-Days-527172693

Here's a Canadian classic - Seasons in the Sun.

I have a lot of other great songs on my Youtube channel. Enjoy!

Navigate back from Canadas Climate to the Weather Canada web page.

Cool pix in the gallery? I hope so. Got something to say about them or one of your own to add? Have your Say; I'm listening.

Get the Newsletter
Blowin' in the Wind