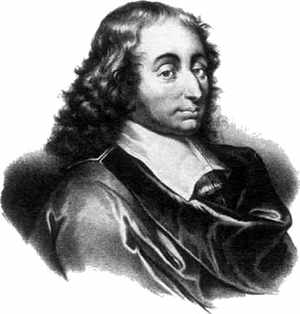 A good barometric pressure definition lets you determine what that means and how significant it really is. And you would know how hard does the air press against us.

Pressure drops as you to up in altitude. How quickly? A good rough estimate is that for every 50,000 feet, about 15 km, you go up, the pressure drops by around 90% from what it was before.

The most familiar ways to define air pressure are either in inches of mercury supported, or mm of mercury (used for blood pressure), or force per unit area.

Common examples of units in a barometric pressure definition are PSI, pounds per square inch, and Pascals, which are Newtons per square metre. A Newton is roughly a quarter of a pound.

And scientists have named Pascals and Newtons after dead guys, like the one at the top of this page.

Meteorologists, ever so odd, like to use millibars. So here's another barometric pressure definition: A millibar is 100 Newtons per square metre and is also known as a hectaPascal, hPa.

Finally, we also use a unit of normal barometric pressure known as an atmosphere. As you might guess, it has a value equal to a typical sea-level atmospheric pressure.

One atmosphere is 101,325 Pa, but the International Union of Pure and Applied Chemistry, preferring round figures, declares it as 100,000 Pa, or 100 kPa. Real atmospheric pressures vary from these amounts because of location and weather patterns.

How much air weight is on the roof of your house? Even if you had a smaller home, 1000 square feet for instance, the pressure on top is 1000 x 14.7 x 12 x 12 or a little over two million lbs, almost 10 MN (per thousand square feet). Enough to flatten any building.

Fortunately the underside of the roof has the same air pressure pushing it up and so your roof doesn't cave in. The precise values will depend on your elevation and weather conditions.

1) Weight, steady force against an object. Note: in physics, we concern ourselves with the distribution of that force, by dividing by the area. For example, a Pascal is one Newton distributed over a square metre. It's easy to get a quantitative measurement of this kind of pressure.

2) The kind you get at work. Requirements to expend time and effort on urgent matters.

3) Peer pressure - perceived requirement to adhere to the norms of a social group. You can also use this to pressure someone to do something.

4) Blood Pressure, BP. Physical pressure of the blood against the inner walls of the arteries. Usually only an issue if it is too high. 140 over 90 mm of mercury, for instance.

This brings us to another useful concept of physics. Force per unit area is directly proportional to the amount of weight an ambient pressure can support, over a fixed area.

A tube of constant diameter filled with liquid works great to indicate this because liquid is flexible.

If you use water, the pressure caused by the earth's atmosphere is enough to hold up about 32 feet. Since it's hard to fit a 32 foot tube vertically in a normal lab, it's more practical to use mercury instead, which is 13.6 times more dense than water. Three feet is more than long enough, as atmospheric pressure normally supports two and a half feet, or 760 millimetres.

We usually put about 30 to 50 PSI into our tires, that would be roughly two or three atmospheres using the barometric pressure definition above.

What is the pressure at the bottom of the ocean?

Since 32 feet is about 10 metres, every 10 m you go down in the water adds another atmosphere's force, according to our previously mentioned barometric pressure definition.

This increases the surrounding hydrostatic pressure. Some ocean water is more than 10,000 m deep, so that's 1000 times as much as the air at sea level, or about 15000 PSI.

That's a lot of pressure. Can't take the heat, either.

Go back from Barometric Pressure Definition to the Weather Equipment web page or visit the Stuff in the Air homepage.