Search for more about weather.


Here's one of our chief causes of lightning thunder and storms: Convective instability. It comes in two types. 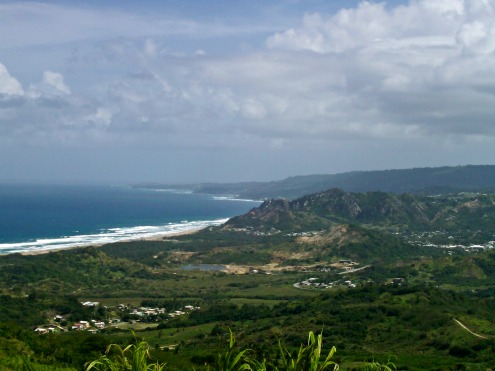 The meteorologists with greater experience work in this area. Why? This is where some diagnosis, decision making and conclusions come into play.

Characterizes a situation, an original state where an upward moving air parcel ends up warmer than its surroundings at ANY level above. Even if not immediately above. You can thank latent heat given off by moisture condensation for making this possible. A primary law thermodynamics students learn.

Here is a quick way to determine the presence of latent instability from a tephigram or skew-T log-P chart. It might help to print one off to follow along with as you read.

If any part of a sounding’s temperature curve, the right hand side one, touches a pseudo-adiabatic curve which crosses the dewpoint temperature curve anywhere below, we have instability. One of the easier causes of lightning thunder and similar storms to identify.

Now what is a pseudo-adiabatic curve, which we also call a moist adiabat? The curved lines sloping upwards STEEPLY to the LEFT on the chart. Meteorologists use this for several things isuch as making a graphical wet bulb calculation when needed. See below.

How to get this volatility? It is more common in summer, but possible all year around. First, the winter cases...

We have sources of heavy snow and squalls more often than causes of lightning thunder and hail. That is, in temperate latitudes at this time of year.

Instability arises anytime we find cooler or drier air above warmer and wetter air. This can happen in the winter by a few processes.

Cold air moving over warmer water. Call this advection, horizontal shift of something (such as heat) by air. A good source of heat and moisture in the lower layers gives great potential for this kind of instability. And it becomes the most important of the wintertime causes of lightning thunder and snow squalls near big lakes.

Another principle is elevated cooling, such as near cloud tops, by infra-red radiation. Heat leaves the air at this level and makes the atmosphere top-heavy.

Now what about summer? The summer has more convective storms than other seasons in many regions. That's because these two mechanisms already mentioned also work now, but one more becomes very important.

Surface heating by incoming sunlight. The most prominent of our causes of lightning thunder and severe weather. Strong sunshine heats the ground and air at the bottom on those sunny days and makes it easy for surface air to remain warmer than the upper air if lifted. This also gives a chance for surface based convection. Surface convection gives a deeper cell than elevated convection.

So we now have an overview of latent instability, now what about the other type?

This happens when a complete layer goes uphill or overrides colder air. This often happens in a front. Pushing an entire layer of air upwards can make it unstable. It will if certain conditions are satisfied.

How does this make sense? Lowering the pressure will increase the air's volume (size). Remember Boyle's Law thermodynamics, where the product of temperature and pressure does not change for an enclosed gas. The volume is kept constant.

If the layer is saturated, it follows the moist adiabat upwards. The top, the bottom and all points in between.

This adiabat is a curve, though, with the property that it becomes less steep at higher elevations. Therefore the top of the layer gets shoved leftward on the diagram more so than the bottom, making that part of the environmental sounding tilt even more to the left than before. That's what increased instability looks like on the chart.

If the layer is not saturated, lifting will not have much immediate effect. Lift it enough and at least part of it will become saturated, though.

So what if only part of the layer is saturated? If that part is near the bottom, it will move to the left MUCH slower than the top, because saturated air cools more slowly while decompressing. Then we can expect sudden sharp instability and spontaneous convection. Another one of our causes of lightning thunder and active weather.

And if the moist part is near the top, a lifting layer can become more stable than before. Unusual.

Which Causes of lightning thunder and severe weather?

That is, go up the moisture density line from the dew point and up the dry adiabat from the temperature. Where the two paths meet, travel down the wet adiabat back to the original pressure. There is your wet-bulb temperature for that elevation.

We can now deduce a wet-bulb profile curve for the layer. If it slopes backward (to the left) faster than the moist adiabat, there you have it! Potential instability that is. Another of our causes of lightning thunder and convective weather.

Go back from Causes of Lightning Thunder to the Chasing Storms page now.