Your thunderstorm lesson plans might begin with a casual introduction to this type of storm. Though the sight of a thunder storm is familiar enough for many people, it still impresses us.

How do thunderstorms form? Thunderstorms develop when condensation forms in an unstable atmosphere. This leads to rapid upward motion in the air which often combines with evaporated moisture.

And the convergence of high temperature or humidity with a lifting mechanism such as a cold front, quickly takes us to the so-called mature stage of the thunderstorm. Most people recognize it as a thunderstorm at this point.

Have a look at these thunderstorm pictures.

We'll start with a few basic thunderstorm facts. An average thunderstorm goes through three stages. Might as well learn about them now. During the first stage in the development of a thunder storm, the cumulus stage, rafts of water vapour rise into the atmosphere.

Here we have rapid cooling occuring due to adiabatic expansion. When the moisture condenses into liquid water droplets, cumulonimbus cloud appears and heat escapes into the air.

At this point it is not yet obvious to the casual observer that a storm is developing. But your thunderstorm lesson plans can include a few hints, lightning and thunderstorm information for students to identify an embryonic storm. Watch some lightning in slow-motion:

In the mature stage of the thunderstorm, the warm air rises until it finds warmer ambient air above. And even higher for more sever thunderstorms.

At this cap, the upward-moving air spreads out like fire hitting a flat ceiling from below, and then gets stretched out by speedy winds aloft into the distinctive anvil shape that we often see in thunderstorms.

When this occurs, the water droplets usually freeze, and when they fall they normally become liquid again, turning into hard rain. Increasingly complex wind patterns sometimes lead to hail or tornadoes.

During this process, a charge built up within the thunderstorm clouds gives the needed potential for lightning creation. When the charge is released, we see it as lightning and though it's extremely brief, the temperature for a lightning bolt can actually become hotter than the surface of the sun.

The sound of thunder is created when heat is released, causing rapid air expansion and molecular collisions. Many thunderstorm lesson plans include how to find out how far away the lightning took place by counting the seconds between seeing the lightning and hearing the thunder sound effects. Then divide that number by five to get the distance in miles or three for kilometers. 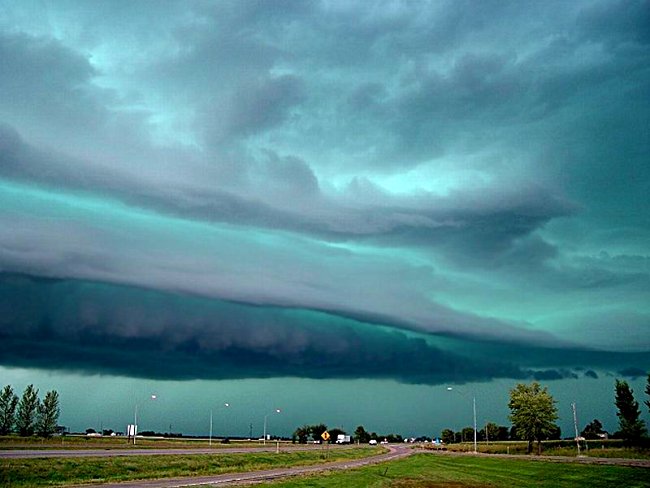 Finally, in the third stage, a down draft takes over the thunderstorm and pushes down, making the thunderstorm dissipate. The cool air will cut the rising warm air and ends the updraft, bringing the storm to its demise.

The city of Kampala, in Uganda, has a reputation as the most thunderous region on earth. Thunderstorms also occur in countries that have monsoon seasons and places that experience typhoons and hurricanes.

Other regions, such as the American Midwest, undergo most of their thunderstorms in the spring and summer, where rising temperatures meet cold fronts coming from over the mountains in the west and create some extremely turbulent storms.

Thunderstorms are part of the natural world and researchers have been increasing our knowledge about them. Your thunderstorm lesson plans could accommodate these developments for the curious minds in your crowd.

For more in-depth information, you can check with your local meteorological society or library. See http://www.weatheroffice.pyr.ec.gc.ca/skywatchers/teachersGuide/tg_chap04_e.html for some additional storm guidance and safety info.

Go back from Thunderstorm Lesson Plans to the Snow Wallpaper web page now.