Search for more about meteorology.


When What happens when weather convection currents are at work? You've seen tall clouds. How does a change in atmospheric stability cause this type of thing? Can we predict it? How?

We start with the weather balloon. It carries a radiosonde, which gives an instantaneous picture of the vertical temperature profile above us. Or nearly instantaneous, as it takes an hour or two to make its full ascent.

The profile tells us where the regions of stability and instability lie in the layers above.

We need to know this to identify where weather convection currents will be either encouraged or dampened. It lets meteorologists know where turbulence, clouds or even severe storms can evolve. 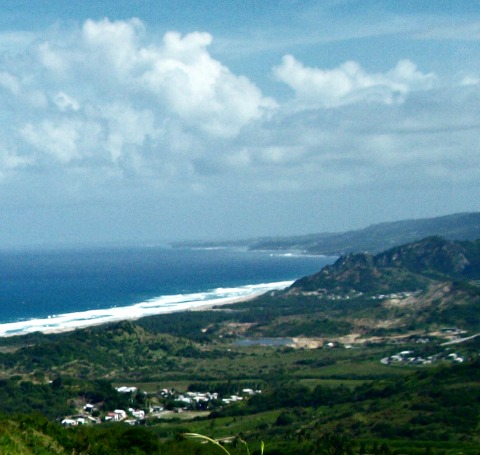 ...as we say, occurs under these conditions. If something forces a situation to change, it will return to its original state, left to its own devices. For example, push your car up an incline and leave the brake off. It will roll back down.

Call a tow truck instead. This guy can take it all the way up the hill where it sits on level ground and won't roll back down.

In fact, if the ground slopes the other way, down the other side of the hill, your vehicle will keep moving further away. Perhaps into a deeper valley. What we have done here is overcome a local stability and then seen continued motion from a so-called latent instability.

In the air, though, things are not quite as concrete. But the shape of the energy contour can be similar at one point or another. Instability in fluids is made more complex by this thing: the air moves and changes - a property not possessed by hills. So you need two radiosondes a day to stay current.

To figure out the air using the parcel method, take some air and see what happens if convection currents move it up or down from its present location. We do this simulation on a thermodynamic graph such as a skewT or tephigram. And the remaining air is undisturbed.

If we go up, the subject air parcel loses pressure and if no heat transfer occurs, the temperature falls at a standard, specific rate. The dry adiabatic lapse rate.

The presence of moisture complicates things; it makes weather convection currents more likely. Especially if there is enough water vapor to saturate the parcel. 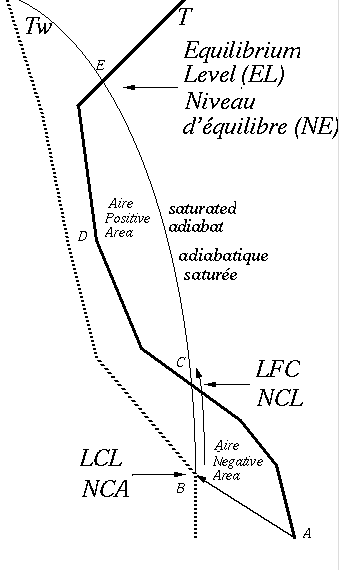 To keep it as simple as possible, we use the pseudo-adiabatic lapse rate. It is represented on the thermodynamic graphs by curved lines sloping UP to the LEFT. The saturated adiabat.

To ascend a parcel symbolically, trace along the dry- or pseudo- adiabat upwards from its original position. Then check to see if it is warmer or cooler than the environmental air shown on the sounding at the new level.

If the parcel becomes warmer than the surrounding air upon ascent, that part of the atmosphere is unstable. That is, it automatically pushes the parcel even further upwards and convection clouds may form.

On the other hand, if the parcel is cooler, we have stability and it will be pushed back down.

The same thing happens in reverse for a parcel pushed downward. If it gets warmer than the nearby air, it is stable and will want to go back up.

If it's neutral, it will stay put, or just keep rolling under its momentum like the moving car in neutral. Without ANY forces. Inertia.

What if all of the air gets pushed up? The test described above could be applied to a parcel from each level. Sometimes weather convection currents can start up spontaneously, even unexpectedly.

Go back from Weather Convection Currents to the Chasing Storms web page.