What are the gases in the air

More about the air.

What gases in the air can we live with? What is clean air? And what is the composition of air, anyway?

Well, we don’t know all the answers. Respiratory and lung diseases are at an all time high. Even though the amount of air pollutants has been decreasing over the past twenty years in many regions, we are still suffering.

The inner city and industrial areas remain particularly hard hit. With all the regulations and air quality programs in place why all the misery still?

Quite simply, we didn’t see the monster until it was upon us. We first saw this with tobacco use. First, we thought only the users suffered. Then we found that second hand smoke affects everyone around it. With further research, who knows what else we’ll find.

The list of contaminants seems endless. We have a myriad of harmful gases in the air. Carbon dioxide, carbon monoxide, nitrogen dioxide and sulfer dioxide are a few.

Other contaminants include coal dust, particulates from wood burning and forest fires, volcanic ash and just about anything which will bond with water vapor in air as it travels through the air.

Additional gases in the air from Cars, Fires and other Things 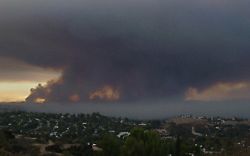 Automobiles are a major source of pollutants. They spew carbon monoxide and stir up the dust which has become trapped in water vapor and travels the globe. As with second hand smoke, it’s much more than the immediate area that’s affected.

Take a large forest fire in California. The smoke can cause large clouds of gases in the air and particulates which drift towards the Midwest and aggravate lung conditions such as asthma.

It can also block the sun and then rob the crops of much needed sunlight. See how far a wind-driven fire move in just over 40 seconds.

Air pollution can cause cold spells or early frosts and reduce crop yields. Smoke will also affect weather patterns, which would then affect agricultural production.

Here's a hypothetical example. Look at coal burning power plants. First, coal miners may die from black lung disease. Then, particulates spew from the power plant into the air causing multiple lung ailments. Particularly affected are people who live within 30 miles of a plant. A research project in 2004 found that children living close to power plants have an asthma rate nearly two and a half times the rate of similar children who lived further away from the plants.

In a 2005 study, it was estimated that 122 million people live in counties that did not meet the air quality standards set out for the US by the EPA. The whole economy can be affected by this.

What we are doing now is playing a major game of catch up. We have learned more and more about the these gases and the composition of the air. We find that we have to pay much more attention to the sublime while still focusing on the obvious.

For instance, everyone thinks the electric auto is the greatest thing since sliced bread. On the surface, it seems to be a wonderful advancement in our hopes of clean air but electricity is required to make it a working reality.

We have to measure how much the increased particulates and gases from coal burning electric plants affects us as well. Hopefully, more will be done to harness the sun, wind and water to produce our electricity. And result in reduced harmful gases in the air.

Go back from Gases in the Air to the Solution Global Warming webpage.