What causes air pollution to get worse?

To understand and answer the question, what causes air pollution?, get a glimpse of when air pollution first started, we have to go back to the days of the cave man when he built a fire in a poorly ventilated cave

Since then, it seems more and more of the earth's surface has become polluted.

Earth one (our primitive planet) had the ability to absorb as well as purify minor quantities of pollutants.  However, the human population grew and society became more and more industrialized, cars burst onto the scene along with this explosion.  We found out the hard way, what causes air pollution.

Now it is most urgent that that we learn how to care for our air and work to clean it up. One place to start is by identifying the problem in the first place. What are the primary air pollutants that we find in most urban areas?

If you examine a variety of reports and air quality regulations, you will find that:...form the majority of airborne pollution. They affect the region immediately surrounding the industries in question

Carbon dioxide (CO2) and water vapor are not pollution, even though they contribute to the atmospheric greenhouse effect.  See more about CO2 further down on this page.

These and other substances remain on the prowl throughout the world's atmosphere and can reach concentrations high enough to warrant our attention. When pollutants become highly concentrated in our air, health and environmental problems follow. It can eventually cause damage to the water supply, flora and fauna.  Even more important is the air we breathe, inside and out.

Do you have an industrial facility that needs a professional air dispersion modelling assessment?

What Causes Air Pollution in the House 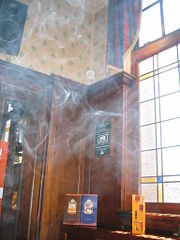 Air pollution occurs everywhere - even in your own home and workplace. In recent decades, engineers and builders have been designing buildings to trap heat and conserve the energy used for heating and/or cooling to keep occupants comfortable. This in itself is a good thing but doing so restricts natural circulation of exterior air into the interior space.

So, as a result, poor ventilation causes air contaminants to become trapped inside. Mechanical filters sometimes alleviate these problems by removing certain substances, but they are not extremely effective.  The entrainment of outdoor air usually works best, provided it is relatively clean air.

Sources of these undesirable indoor air pollution issues include:

Need I add any more to the list? Another alarming pollutant lurks in your house.  Radon-222 is a colorless, tasteless, odorless and naturally occurring radioactive gas and it creeps into the basement from the ground.  Radioactivity leads to cancer.

Here are some outdoor air pollution sources.  In urban areas, the two major causes of pollution are transportation and fuel combustion.

Cars produce high levels of a gas called carbon monoxide in addition to hydrocarbons and nitrogen oxides. Adding to that, fuel combustion inside stationary sources such as heating, power generation and some industries emit sulfur dioxide.

People still ask what causes air pollution regarding carbon dioxide.  In fact, the most talked-about substance in the air these days is carbon dioxide.  Two of the main issues here are deforestation, the removal of sequestration opportunities, and the burning of fossil fuels, a strong source of CO2.  Sequestration is the filtering CO2 out of the air, and it's something plants do naturally.  They need it for their own growth.

As a result of human processes and changes to the natural ecosystem, net emissions of carbon dioxide have been increasing at a rate of 4% annually.

Ocean water holds approximately 60 times as much carbon dioxide as the atmosphere.  That is a whopping amount.

Once the oceans can no longer absorb carbon dioxide because of saturation, then the excess CO2 will remain in the atmosphere.   One of the causes for concern here is that as the temperature of the water increases, the ability for the water to absorb CO2 decreases.

The basic connection between this gas and global warming goes as follows.  Carbon dioxide is a good transmitter of sunlight energy. However, it partially restricts radiative energy returning from earth back into space where we think it belongs.

Everyone has heard of the greenhouse effect, right? This keeps the earth from getting drastically cooled during the night.   As the amount of CO2 increases in the atmosphere, a warming of the atmosphere near the earth's surface has been expected to occur.  Right now, increased CO2 concentrations may cause a significant percentage of global warming.

Right?  Do you agree?

Stop The Habits of SMOKING

If all people have stop smoking we will able to breath easily and the number of people getting asthma will reduce. Barry's Response - Asthma. Sure …

Saving our planet one step at a time

Can we save our planet, bit by bit? By now we all know about climate change? We see images of temperatures rising, storms increasing, glacial ice …

We have a plant of about 200,000 sq. ft. We build about 800 fireplaces a day and have about 300 members working in the production area. Production area …

how do you detect sulphur dioxide in the air, without fancy equipment? Barry's Response - Angela: Sulfur dioxide (SO2) is a heavy, colorless …

If car air pollution is what causes global warming, then how come there was no global warming in the 1960's when cars were polluting the air way worse …

We need to find the affect of smoking. Is there something that is available to test the quality of air in an office? Smoking is permitted in a designated …

cutting of trees Not rated yet
it's easy 1 cutting of trees 2 making more and more factories Barry's Response - Easy to destroy the environment, I assume you to mean. The …

What causes pollution in the outside? Not rated yet
Well, I am doing a report on global warming and pollution. I know cars cause pollution, but what else does? Please help me!!!! Barry's Response - …

learn about air quality Not rated yet
I think kids should learn more about this in their s.o.s.e lesson because it is an important thing to learn about so our ozone layer. If we learn about …

How much pollution does a plane put out Not rated yet
I an doing a persuasive speech abut global warming and I need help about the outside pollution machines. The one that really stumps me is the airplane. …

MY REAL IDEA OF AIR POLLUTION Not rated yet
What I think about air pollution is black thick fog and that is so toxic that on fatal breath that it my kill you. One time in my house I was cooking …

Darrell's Response Not rated yet
Although it has became a widely acccepted fact that CO2 is a greenhouse gas, Methane gas contributes more per ton to the greenhouse effect, and, it is …

CO2 is irrelavant to temperature Not rated yet
CO2 has nothing whatever to do with climate. There is no data that has ever shown that carbon dioxide drives climate. Co2 levels in the atmosphere rise …

website sucks Not rated yet
hello i am 65 years old and i think you are technically wrong. Your website sucks and I will never go on this website again thanks again Jefferey …

Fuel Consumption and Environmental Impact of Rickshaw Bans in Dhaka Not rated yet
Rickshaws are environmentally friendly, safe and need no fuel. A lot of family incomes depend on rickshaws. Up to 38 unique professions. Please support …

what has wild life done to you Not rated yet
If we all be active not using our cars to go every where we are one step closer for our world to be a better place.People hurt bees and cow when they do …

start smoking story Not rated yet
Here's a start-smoking story for you. The quality of air these days is affected by all of those people out there who like to pollute our air by smoking …

What causes air pollution from Smog?

Smog has started to make an appearance in tropical and subtropical regions where savanna grasses burn periodically.

What causes air pollution and smog? Its unpleasant properties comes from unburned gases emitted by our usual suspects:  engines and other combustion sources. 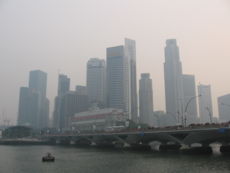 The products of photochemical reaction include

I am sure you have heard of ozone!  This is a gas created by nitrogen dioxide when it gets exposed to sunlight. This gas can cause eye irritation, damage to trees and crops and impaired lung function.  We also have industrial smog.   Need I elaborate on that?   Just take a look at our industrial facilities.

What can you do to reduce global air pollution? Driving a vehicle that gets at least 35 miles per gallon, bicycling, walking, and by using mass transit are good ways to start.  You can try to make your home more energy efficient as well.  Begin a recycling campaign.  Plant a few trees.   You can also support stricter clean air laws.

Want a bit more about the benefits of recycling?  See this website on recycling and Global Climate Change.

Learn about what is climate change, what causes it, and how you can play a part to reduce climate change through green living, recycling and energy efficient efforts.

Earth is the home to everyone and no one likes to live in a dirty home.  Together, it is possible to make the earth a healthier, cleaner and more pleasant environment in which to live.

Need to know about causes of air pollution?

A lot of people ask this question.

I hope this information helps.