When we make a map radar weather data needs to be understood. Appreciate both the stuff in the air and the physics of the weather radar equipment.

Then you will be well on your way to interpreting the radar pictures revealed. We start with a diagram of the electromagnetic spectrum.

Kelly from Canada asks: What is a radar wave? There is no such thing as a radar wave. RADAR is an acronym for radio detection and ranging. Simply put: RADAR equipment uses radio waves to find the distance and location of other objects. The term that should be used is "radio wave".

Radars of all types use microwave radiation. One thing you probably learned in high school physics is the fundamentals of electromagnetic radiation.

Remember the old illustrations where you see it drawn like the waves in ocean pictures? By definition, wavelength is the distance from the very top of one wave to the top of the next. One cycle.

Electromagnetic waves include light, radar, radio, X-rays, infra-red and such. Another thing to keep in mind is that he wavelength in metres multiplied by the FREQUENCY in Hertz, cycles per second, is almost exactly three hundred million in air or outer space.

The map radar weather services use and other radar wavelengths are quite a bit less than one metre, so we state them in centimetres.

Really high frequencies make MegaHertz (MHz) more practical. Now if you use cm and MHz, the two numbers multiplied together will always give thirty thousand (30,000). This is the rule of thumb radar technicians use.

Chart radiation as it relates to radar? 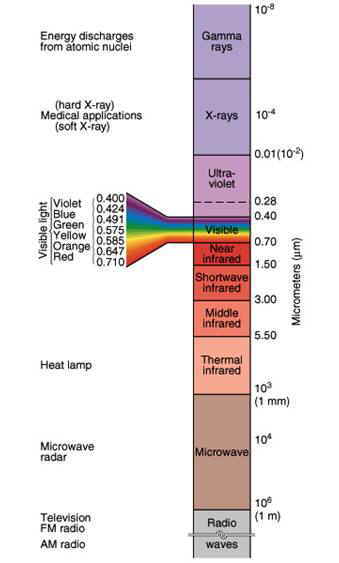 Radar is available in different bands, like saying AM and FM when talking about radio. This article goes into more detail. And their wavelengths vary from under half an inch (0.86 cm, actually) to almost a foot (23 cm). That range would be near the top of the brown Microwave band near the IR spectrums shown above.

We have K-band for aviation and local weather radar and X-band for ships and police radars.

C-band is for weather surveillance, S-band for aviation and weather as well as microwave ovens. Finally L-band usually gets employed by air traffic control services.

These wavelengths form part of the electromagnetic spectrum. That's sort of a frequency map radar weather stations take up only one small part of.

The equipment neither sends nor receives the signal constantly. Instead, it alternates - sending a short burst or pulse and waiting a much longer time for the return.

A weather Radar will do this about 600 times every second, its pulse repetition frequency (PRF). With that you can use it to see, with certainty, out to a distance of about 150 miles or 250,000 metres. Here, use this formula.

If a signal comes back after longer than 1/600th of a second, it had to have travelled further out. Now it can get mixed with up with new reflected signals and gets the label "ambiguous".

It should come as no surprise those more distant objects on the map radar weather and such will normally reflect a weaker signal.

The radar detects things falling within a small angle, about 1° or so wide and high. Therefore the antenna, which looks like a backyard satellite dish, must keep moving quickly. It goes around and around as well as up and down in order to map radar weather pictures of the whole volume of atmosphere surrounding it.

The technical terms for these angles are azimuth for left and right and elevation measured up from the horizon.

The original form of output display is a series of concentric rings with a dot at the center representing the map radar weather location. The largest ring spans about 300 miles across.

This display is called a Plan meaning viewed from above Position Indicator(PPI). It shows the image which should be drawn on an wide cone with its point touching the ground at the center, viewed from directly above.

In other words the further the image is from the dot, the higher it is from the ground. But you can't tell how much from a flat image.

So now we take the several dozen cones produced by the radar, each with its own width. Place them all together with their points down on top of a single point and slice straight across at some particular height. You can get a composite image of approximately one single altitude.

This CONSTANT ALTITUDE plan position indicator (CAPPI, shown above) is a more useful map radar weather forecasters use, and therefore quite commonly used in forecasting departments.

This is one of the more technical areas of weather forecasting. It requires substantial support services in the meteorological department.

Zoom in on this - There is only one way most small businesses succeed online. This web page explains it very well and very quickly.