All about upper air charts 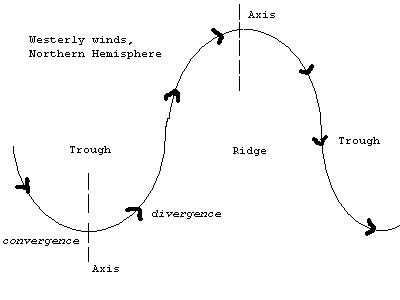 Several types of upper air charts give meteorologists and other forecast office personnel shortcuts to explain elaborate principles to users.

What do they do? Meteorology experts check the high elevation weather maps and see many curves bending across from the left side to the right. Data from the upper air sounding system goes into a computer which then makes these upper air plots.

What's so special about them? Each curve is a line of equal height above sea-level at which a specified pressure is reached. The label on each upper air analysis map tells us which pressure we're dealing with.

Sometimes many of the curves on upper air charts will lie snugly together and then they will spread out in other areas of the map. The lines loosely represent upper air winds. Several lines together show a well-defined stream and lower intensity upper air currents exist where they spread apart.

In a fashion similar to a river or gulf stream jet, these streams meander, merge and separate quite often. And it can look quite random.

A stream of this sort is a steady upper air current. A thousand miles or so long and over a hundred wide, they can last for a moderately long time, at least a few days. You can see these on a forcast jet stream map for instance.

Picture one of these charts. Some streamlines span a substantial distance. The largest ones can cover a good portion of a continent and smaller streamlines may only have a regional influence.

We call straight west-east motion in either direction Zonal Flow. Meridional flow is quite the opposite. It takes a huge roundabout route, swinging far north and south on the map as it makes its way across.

An upper air map can show two or more streams simultaneously over the same continent or ocean.

Two streams become in-phase when their high and low points, known as ridges and troughs, line up directly above (north and south of) each other. In fact they may appear to merge for a while.

We use the term out of phase when the big humps are not neatly aligned.

Graphically, a stream shows up on the map as a group of constant pressure-height contour lines all huddled together. Why do we care about this arrangement?

One of those lines, dubbed the control line, can signify the entire stream in a summary depiction or forecast plot. If you want to use ONE line on your weather map to show someone, this is the best one. The ideal curve passes north of a vorticity maximum, or south of a maximum.

For example, many public forecasts show a single line to represent the jet stream. It does not show as a single line on the upper air analyses maps, but the upper air charts show one or several groups of curves that flow together and apart and make any number of jets.

Go back from Upper Air Charts to the Chasing Storms webpage, or visit the Stuff in the Air homepage.


Streams and control lines constitute a valid example of how a thorough bureau meteorology analysis gives forecasters critical tools. We use them for making better predictions, and especially presenting our information for untrained audiences.