These weather map symbols appear on the surface maps meteorologists use for their analysis. Here's a good example. They display the data in a consistent format across the world so there is never any confusion.

What about Upper air weather map symbols and patterns on the 500 millibar main upper air map? Meteorologists often find this map the first one to consider when setting up to prepare a weather forecast.

These maps consist of faint whirl pools in a quasi-concentric pattern. And they have central values marked by integers ranging from around –20 to about +40. What do these symbols describe? Circulation. Movement as in a vortex. 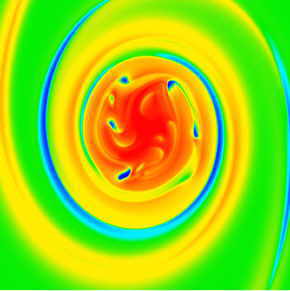 This is vorticity. Think of ceiling fan rotation. We plot it using weather map symbols in units of circle radians per hundred thousand seconds. This time period is a little longer than a day.

We have two definitions for vorticity. The difference between them is small but important.

1. Relative vorticity deals with horizontal rotation of the air above the earth. Motions such as flow around some corner, swirls and eddies. That's the visual effect given by these weather map symbols.

The same outcome is created by changes in speed over some horizontal distance, also known as wind shear. You can see this relation if you look at a fast flowing creek. The water near the edges flows much slower than out in the middle. Little eddies appear.

They look like whirling vortices partway across the stream, in the shear zone. And they redistribute water and its energy.

Remember, the earth is also rotating. Using vector mathematics, we can add the two rotation vectors together and arrive at 2. Absolute vorticity.

Imagine a pencil sticking straight into the ground beside you - all the way through the planet. The earth rotation speed viewed relative to the pencil depends on your latitude.

At the equator none of the earth's circulation would be around it. If you were at the North Pole, though, all of the earth would be rotating around your pencil. At a speed of about seven radians per 100,000 seconds.

What is the equator? The circle dividing the northern and southern hemispheres.

If our pencil were inserted into the ground here instead, the earth's rotation would carry it along. Get it? The stick moves with the earth so none of the globe goes around the pencil.

...and Line of longitude and latitude. What happens if our post were to stick out at the North and South Pole? It remains static while everything else moves around. We multiply by a fraction.

That quantity is the cosine of the latitude, for points between the equator and the poles. That includes – well, pretty near the whole world.

Degree radians and such

For vorticity symbols, we use units of angular velocity such as degrees per second. Actually, we use radians per second, where 1 radian is approximately 57°.

Typical values are similar to the earth rotation speed. We usually see a little less than a ten-thousandth of a radian per second.

So here's the velocity formula.

The speed on a spinning circle's edge is simply the radius times the angular velocity in radians per second. For a twirling sphere like the earth, multiply that by the cosine of the latitude. This will get your speed of rotation at any point. Our planet's radius is about 6400 km.

Positive relative vorticity in the atmosphere corresponds to upward vertical motion. We associate this with increased cloud and precipitation, while negative vorticity corresponds with clear skies and dry conditions. Examining the vorticity patterns can help create more accurate cloud, drought and rain forecasts.

How is POP - probability of precipitation determined anyway? Read the answer.

Relative vorticity is calculated from wind data using this idea below. We compute the difference between:

Environment Canada weather meteorologists try to pinpoint high and low spots on their maps. They use current vorticity weather map symbols to determine whether they are stretched or transported intact by the upper level winds.

We call these two mechanisms vorticity shear and advection respectively. The maximum and minimum weather map symbols can appear and disappear quickly. That makes them more difficult to track from the map on one time frame to the subsequent atmosphere diagrams.