Is it really that simple? A gulf jet stream flows in the water in the same way jet streams flow through the air. Take a look at this atmospheric diagram. 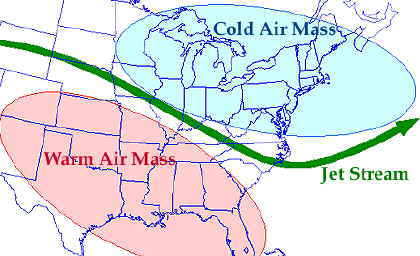 The jet stream separates the large air masses. In preparing a weather forecast jet stream analysis is one of the first things meteorologists look at. It provides a look at the "big picture" in the atmosphere.

It acts as a giant rubber band to keep north pole temperatures in their proper place.

What does that mean? Jet streams flow along the boundaries separating air masses.

Stream customers from the internet into your world. Design your own website to reach them.


The gulf jet stream and other global winds.

In the crudest sense, these theoretical winds behave in a manner similar to the jet streams.

Geostrophic wind - very ideal upper level winds. Not extremely accurate if predicting winds close to the ground, but pretty good for winds occurring higher up in altitude. A lot happens near the ground that screws things up...

1) Friction - You feel wind. That's friction, caused by air rushing by you. The momentum conservation law dictates that wind will transfer momentum to you and you feel the push.

Mountains and trees can change the speed and direction of the wind at the surface. This takes place in a fashion like a gulf jet stream approaching an island and changing its course.

By the way, does a person in a hot air balloon feel the wind? Not much, probably, although I have never been on one. Even on a windy day the balloon moves roughly the same speed and direction as the wind and there is very little friction between the two.

2) Flux - What's that? Air heat exchange. Any transfer of heat or moisture such as water vapour from the ground or lake into the air...

or vice versa when it rains. The transfer of heat changes the stability of the atmosphere and changes the winds dramatically.

Think of stability as balancing a rock on top of a pencil stood on end. Instability causes it to fall. Incidentally water vapor contains more heat energy than hot air does. It creates even greater potential for instability.

3) Other distortions - The earth's curvature + rotation and nearby pressure changes make atmospheric calculations harder. They require us to introduce correction factors and terms into the governing equations.

Extra forces, real or otherwise, change the path of a gulf jet stream or any other moving object for that matter. You might hear meteorologists refer to the Coriolis Force, for example.

For some background into the physics of rotating fluids see this article.

An oceanographer would be able to determine if a gulf jet stream experiences similar complications.

The Gradient wind - introduces another force into the balance of forces.

The centripetal force. It is the force equal and opposite to the more familiar centrifugal force.

We constructed the geostrophic wind above by balancing the pressure gradient force , which naturally pushes air from high pressure to low pressure, against the Coriolis force, a mathematical correction for the rotation of the earth.

The gradient wind adds the centripetal force to this combination. Its direction varies with the orientation of the pressure systems. We observe less wind in high-pressure systems than in lows because of this balance.


The actual values of these forces will partially depend on your latitude. If the forces here are highly unbalanced we can get small low pressure areas, and even tornadoes, which spin in the opposite direction.

You probably know meteorology is more complex than this gulf jet stream analogy would suggest, but these fundamental forces are examined in detail and added to additional forces to get thermal wind and others. This one deserves an article of its own.

Go Back from this Gulf Jet Stream page to the Forecast Map Weather webpage now.