The global warming evidence from the National Space Science and Technology Center shows lots of variation (a range of 0.845 deg C) between 1979 (when satellite measurements began) and 1997 but no significant trending, either up or down. 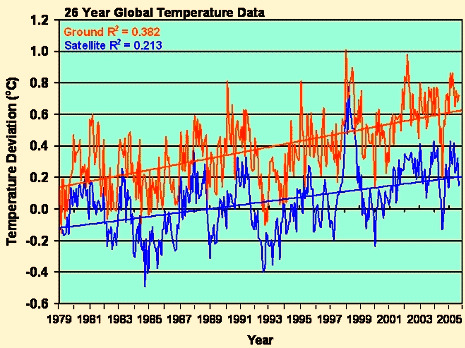 In 1998 there was a peak excursion of around 0.8 deg C associated with the extraordinary El Niño event of that year. Following recovery from this excursion, the residual temperature was slightly higher than the '79-'97 average but since May 2002 (or possibly even earlier) the temperature has been trending down (i.e., cooling) at a remarkable – some might even say alarming – rate of 1.5 deg C/year or more (depending on just where you start fitting global warming evidence to the decline). [note from Barry - huh??]

The temperature in this region should be very sensitive to CO₂ levels but, since the CO₂ levels have increased continuously over this entire period, the behaviour of the temperature contradicts this supposedly causal connection (and suggests we have a global warming fake on our hands).

As reported by the US Climate Change Science Program, a "hot spot" (i.e. region of large positive values) in the temperature rate-of-change that is expected (if CO₂ is the cause of climate change) is missing. This "hot spot" should be situated at about 10 km altitude over the equator but is completely absent from the data which shows a pretty much uniform value quite near zero. Maybe global warming is not happening after all.

Note - Carbon Dioxide (CO₂) is the most well-known greenhouse gas (GHG).  If your corporation needs GHG reporting done for government requirements, please contact Calvin Consulting for this set of expertise.  They will get it done easily so you won't have to worry about it.

Although NASA's GISS surface temperature data are now known to be suspect, even this global warming evidence shows that the 2008 surface temperature was less than the "best-case" scenario that was modelled by the IPCC and provided in its most recent reports, which scenario-held CO₂ levels at the year 2000 value. According to data from Scripps Oceanographic Institute, CO₂ levels actually increased by 4.2% between 2000 and 2008. Furthermore, as has been acknowledged even by the CO₂ proponents, the surface temperatures have been trending down for quite a while now.

If you look farther back in the GISS surface data set, you see that temperatures have trended down (note: not just fluctuated) for about 50% of the time, while CO₂ levels have increased 100% of the time. In fact, in one downward trending period, the CO₂ level actually increased by twice the amount it did in the preceding upward trending period. Talk about convincing evidence! 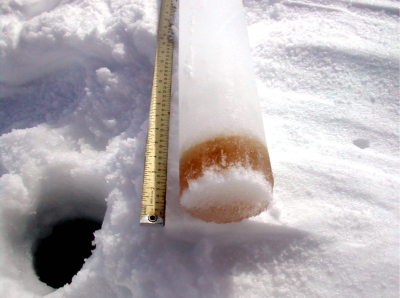 Data from ice cores (ref. Science 12 Mar 1999, Vol. 283 no 5408 pp1712-1714) indicates that CO₂ levels go up (and down) some 600 years after temperatures, strongly suggesting that CO₂ levels are a result of changing temperatures rather than a cause. As the authors state "…carbon dioxide concentrations increased by 80 to 100 parts per million by volume 600 ± 400 years after the warming of the last three deglaciations". This global warming evidence seems to be something that Mr. Gore overlooked.

There is an argument by the human induced global warming supporters that opposing viewed people aren't using peer reviewed data. Only the 2nd and last of the above are from peer-reviewed literature. However, the rest of them are readily verifiable from accessible data sets.

Oh yes, the IPCC model results came from the IPCC reports, which are allegedly peer-reviewed but the definition of peer in this case might be wanting. Peer review is only as good as the balance of agendas of the reviewers which has become painfully obvious not present in the latest email scandals. The unmasking of the "hockey-stick graph" fiasco and its aftermath along with the current revelations out of CRU suggest we should not trust the peer-review process to always be completely unbiased. Using "peer-review" to counter things is simply arguing from authority without actually addressing the real global warming evidence.

Hopefully, we don't base policy on the loudest voice! But looking at what has happened in 2010 with the cad Tiger Woods, I doubt sense and rational discussion will prevail.

See this person's introductory comments - page 1 of this series - on the global warming essays page.

This is page 2.  See subsequent reactions to this data on page 3, the global warming argument list.