A hygrometer makes humidity measurements - How?

Search for more about weather instruments.


People have created many hygrometer makes and styles. See some of the best of what I've seen.

They not only add a touch of class to the home or office but serve a useful purpose. They measure and display humidity, with temperature sometimes.

Humidifiers and moisture controls also need a sensor of this type. 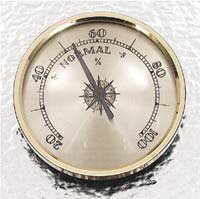 Other special places for dampness measurement and control include musical instruments, guitars, pianos, etc. and health environments such as incubators.

Humidity is one of the most complicated quantities discussed in meteorology. We specify humidity in many ways because there are many ways of measuring it, and it is dependent on many other things, like pressure, temperature and so forth. Thermodynamics.

Usually by calculating the temperature difference between two thermometers, one which is kept wet and the other one dry. The wet one is cooler unless it is extremely humid. 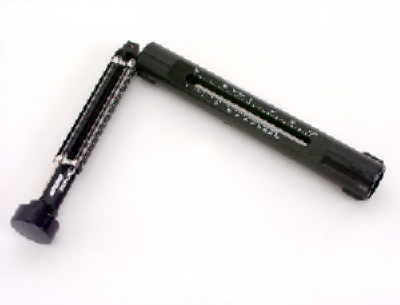 A psychrometer sling, in the pictures above holds the two thermometers and provides a mechanism for you to whip them around to accelerate air exposure and get a more accurate reading. With a little ingenuity, you can invent a homemade hygrometer, assman psychrometer or sling psychrometer using this principle. These ideas lead to many possible science fair topics.

On a more technical note, a scientific dew point sensor uses a salt covered probe which absorbs moisture and conducts electricity better when there is more moisture to absorb.

Still other devices and scientific hygrometer makes use hair to measure humidity and hair has natural moisture-absorbent properties that make it especially sensitive to humidity changes.

It also requires calibration. Temperature and humidity recorders may use this kind of hygrometer.

Learn a new word or two

Definition Humidity: How many ways can you say Humidity?

Mixing Ratio - The number of grams of water vapor in each kilogram of DRY air.

Relative Humidity - This is the one we are most familiar with, as the usual home hygrometer makes reference to RH. It is the mixing ratio as a percent of the saturation mixing ratio, maximum possible at this temperature.

More simply put, the percent is the ratio of the actual amount water vapor in air to the amount that would be present if the air were saturated...

People often say that saturation is the most water vapor the air can hold, but it really does no such thing. A hygrometer makes measurements so we can calculate RH for our weather reports. You simply refer to a relative humidity chart.

Dew Point - If you make air colder, its relative humidity, RH, goes up, even without adding any moisture. If you make it even colder RH migrates towards 100% and dew starts to form. That is called the dew point. If it is cold enough, we use frost point instead. Same idea but colder. Data environment loggers and other professional devices record this quantity directly.

Wet Bulb Temperature - If you were to cover the floor of a sealed room with enough water, it would evaporate until the relative humidity of the air reaches 100%. But the air temperature would decrease until it reaches the wet bulb temperature.

A hygrometer makes this measurement directly. This is the temperature recorded by a wet thermometer thus the name wet bulb -- basically how cold it feels when you're all wet.

The virtual temperature is the temperature you would have to heat dry air, without changing the pressure, to make it just as light our moist air.

Humidex - An equivalent feels like subjective temperature Canadians use to describe the level of discomfort on hot muggy days. They don't like heat very much.

Vapor Pressure - The pressure just the water vapor would be at if all the rest of the air were removed and the vapor were left by itself itself without collapsing the container. Also called partial pressure of water vapour.

There are others, such as lifting condensation level and ones with the word potential in the title. They are more complicated, and defining their relationships require fancy mathematics such as the Clausius Clapeyron equation, a psychrometric calculator or graphs such as a Skew-T log P or tephigram.

Psychrometric software easily converts between these conventions, but most commercial hygrometer makes simply give you the relative humidity.

Also, go to the Stuff In The Air home page to see what other useful knowledge you can find.

Go back from Hygrometer Makes to the Weather Equipment web page now.