The Physics of Ice Skating

Figure skating. Is it a sport or a performing art? The physics of ice skating will give you another perspective – a science. 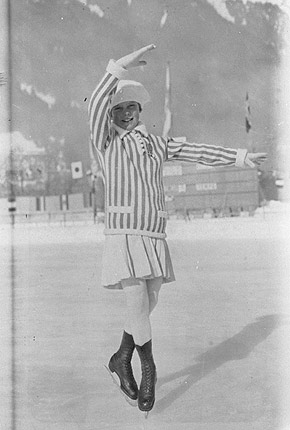 Let's start with a look at the skating shoe, which is equipped with a thin piece of metal fixed to the exterior of its sole in a vertical position.

This blade ensures a minimal area comes into contact with the ice, yet long and wide enough to prevent the weight of the person from slicing the into the ice surface with the blade edge.

What does that do for the skater?  You may guess the correct result – reduced resistance in the form of friction, because of this lowest practical surface area in direct contact.

There's more.  The physics of ice skating has another factor that plays a role in reduction of friction. You may have heard that the high pressure forms a layer of liquid water between the surface of solid ice and the edge of the blade.

This water layer is thin, a few thousand molecules or less, and even more so at lower temperatures.  It should be obvious, though, that the ice itself is slippery enough and a pressure-induced liquid film is not essential for smooth motion.  In fact it's still slippery even at temperatures so cold that the pressure cannot melt it and this age-old theory doesn't really hold water (so to speak).

A more recent viewpoint states that molecules near the surface stay in a partial-liquid state regardless of temperature and pressure and they allow someone to glide freely across the ice below in a manner similar to graphite lubrication.

Role of vorticity in The Physics of Ice Skating

Vorticity is a concept from meteorology that describes horizontal rotation in the atmosphere, and more generally, the extent of circulation or rotation of a body in any fluid medium.

Analogously, you can think of it as another part of the physics of ice skating.

You Spin Me Right Round:

A skater moves without falling down because angular momentum, an angular component in linear motion, helps stabilize the moving body, just like a gyroscope or the spinning bicycle wheels offering stability to the rider.

Studying the spin of an ice skater is an excellent way to demonstrate another skating-physics concept called angular momentum and how it is conserved. The skater moves slowly while arms spread across, when the skater brings her hands closer to her body, the speed of spinning increases so that the moment is maintained. 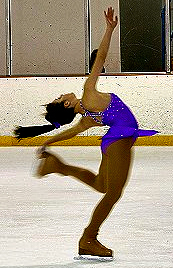 So even though the speed, angular velocity, will increase upon compression, the amount of area all element of mass sweeps out relative to the axis will remain constant when totaled, minus a small amount of loss due to friction.

Spinning is also dependent on torque, the force that leads to rotation. This force is achieved by pushing the ice.

For example, you often see a skater achieving multiple spins in edge jumps. Airborne jumps with names such as double-axel result from the torque created by the turning of skate as she takes off from the ice surface.

Our skater can increase her rotational speed by pulling in her hands closer to body, but stretches her hands and legs for stability while landing.

With practice, she will acquire the skills to effectively use these forces to her advantage and that makes for impressive figure skating.

It is NOT knowledge of physics of ice skating that helps figure skaters make exciting movements. Instead, it's the practice, the effort and fluid motion they put in with little or no regard for the theory.

But those of us who aren't so graceful...will think of the physics instead.

It is a wonderful feeling to move quickly over a frozen winter lake ice skating.

Do you wonder how it is possible to move over ice?

Or about physics and ice skating?