Try Environment Canada for current satellite imagery use the link above the photo so see the five day forcast for Calgary weather.

If you want a second opinion, The Weather Network, Accuweather, Weather Underground, WeatherSpart and Weather Channel will also tell you what kind of weather Calgary AB Canada is to expect.  Check the links on the right.

Does the latest Calgary Alberta weather forecast make any sense to you? Try comparing it to the Calgary climate as outlined in the chart below.

This summary of Climate in Calgary Canada helps us teach the people who live here to never be unprepared for surprises. That could mean extremes in temperatures, wind, rain, snow or even pleasant Calgary weather. Imagine that!

The Calgary International Airport, YYC, lies about 10 kilometres northeast of the city centre. It logs the official temperatures for the city, though temperatures closer to downtown tend to be warmer than the airport more often than not. This results from changes in:

We usually see daily highs in the low to mid 20's in July, around minus 5 in January, as shown below, and winter overnight lows in the -10 to -20 range. You can see, though, that Calgary weather extremes do happen. And they occur even more so, generally, east of the city.  Here adre the average daily high temperatures throughout the year, with each month denoted by its first letter.

The temperature scale on the left starts at -6°C (which is about 21°F) and goes to 24 degrees (75°F). July is the warmest month with a 24-hour average of just over 15 and January has about -7.  For precipitation, June gets the most rain of any month with about 80 mm, with less than 20 (as melted snow) in each of the winter months.  See this plot for monthly precipitation values. 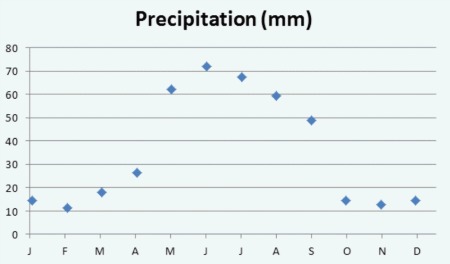 The city receives about 169 frost free days per year on average. Some of them occur in the fall and even winter (during Chinooks) after the growing season has ended and we normally left with only about 115 consecutive frost free days per season, from around May 23 to September 15.

The wild temperature fluctuations characteristic of Calgary weather are partly attributable to the continental climate. The high altitude also plays a role, and some of the remaining credit goes to the turbulent winds and low humidity in the wake of the Rocky Mountains.

The temperature reaches 20°C or better, about 85 days each year. And 30° only about four times. Chinooks and cold fronts can result in temperature changes of 10° or more in a single hour.

Another thing you might be concerned with is the amount of heating or air conditioning you would use in a typical year. 18°C is the accepted threshold for these calculations, and a degree-day tells you how much above or below that level the temperature stays, and for how long.

For calculating the potential for energy consumption, the usage of heating for any place would be crudely proportional to the total number of degree-days below 18 degrees in each year. The same could be said for degree days above 18 and air conditioning usage, though most people in Calgary do not even find it necessary to own A/C. Actual usage will also be affected by the location's wind exposure, building design, temperature settings and the amount of bright sunshine.

Calgary weather gives us about 40 degree-days on average above that 18 degree mark, which is not very much. We also get an average of about 5100 degree-days below 18°C, meaning you won't survive the year without a furnace. Even more amazing, this figure is considerably less for Calgary than most of the rest of the Canadian Prairies.

What about Calgary's precipitation patterns? Calgary has a definite dry season and a moist season. The city gets a little over 400 mm of total precipitation in an average year. Of that we often get 120 cm of snow between September and May, which melts down to about 120 mm of water. That's the drier season.

The better part of the 300 mm of rain falling between May and September constitutes our wet (and growing) season. This still makes xeriscape gardening, a technique that conserves water, worthwhile in Calgary weather. We can go months without significant moisture even in the summer.

The winds around here are worth mentioning as well. Southern Alberta in general is recognized as a windy area year round. Calgary's highest gust at 127 km/hour occurred in June, 1956, probably during a thunderstorm.  Not during one of the winter Chinooks we are so famous for. With that in mind, more of average the year's 36 days with wind greater than 52 km/hour happen in December and January than any other month.

In every month of the year, the most frequent wind direction is west or northwest, with stronger winds coming from the north. And when the temperature is cold, that wind chill bites. Minus 40 or worse about 3 times a year.

Is it sunny here?  At over 2400 hours on average of bright sunshine per year, Calgary weather, along with many nearby southern Canadian prairie locations, makes us one of Canada's sunniest places.

Here is a great Environment Canada page comparing Calgary climate with other Canadian cities.  It can be bright, sunny and extremely cold and windy all at the same time in winter. Something to experience. If you are interested in Calgary and want to see a bit about the city and its neighbourhoods, visit this Calgary Real Estate page.

Want to see a few varying perspectives on the weather in Calgary?

See a few forecasts for different providers and compare with this Calgary climate data.

Weather for Calgary from:
Environment Canada