Law of conservation momentum and weather

Search for more about atmospheric physics.


Conservation momentum - In meteorology, we find that conservation of momentum alters our weather systems in special ways. What do we mean by this?

Are troughs and ridges aligned perfectly straight up and down on the weather map? Usually not. We use a trough axis to show the center of the trough. It cuts across each of the curves at its lowest point.

What does it mean when the trough axis tilts to the left or right, or curves with respect to the nearest line of longitude and latitude?

On the grand scale, it means angular momentum is being transported northward or southward? In accordance with a well known law of conservation momentum around a spinning body remains constant. 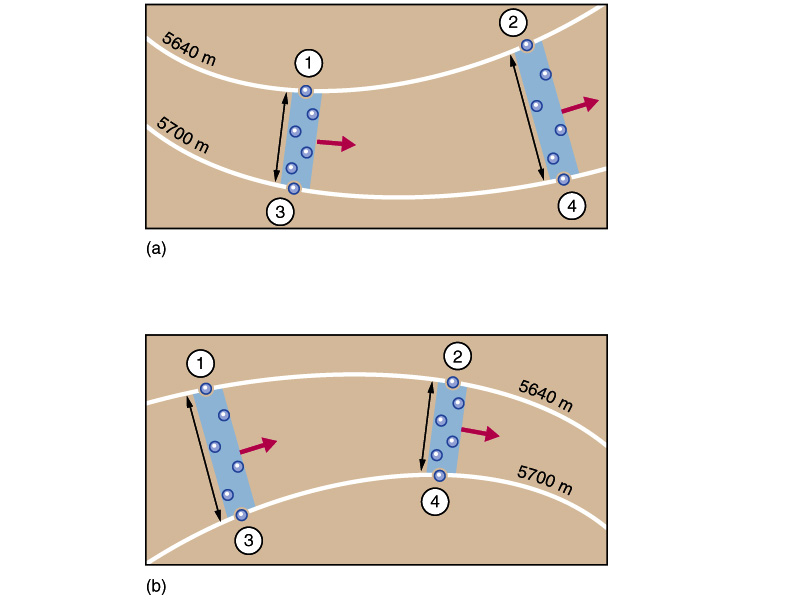 This requires some further explanation.

Let's start with a few definitions.


Ok, so remember some of your grade-school science projects? Take this thought exercise for instance. A figure skater pulls her leg inward during a steady spin which then speeds up.

Why? The speed multiplied by mass multiplied by distance of the mass from the center, the axis of rotation, stays just about constant because of the conservation momentum demonstrates.

In this case, tightening up reduces that space occupied and her mass stays the same. Then her rate of spin has to increase to keep the angular momentum constant.

Building and keeping momentum! That's what having a website business is all about. Look at these

Research has determined that westerly angular momentum automatically builds up to excess in the atmosphere near the equator. That is, momentum in the winds blowing in an eastward direction.

In order to maintain conservation momentum that builds up in the equatorial regions migrates towards the poles, keeping it balanced.

How? Think about this...

Suppose you're holding a fire hose and pointing it to the right, the east. If you tilt the nozzle a bit so that it points northeast while spraying full-blast, the momentum now travels upwards, as if towards the North Pole on our weather map. And if you point it downwards, it will dig a hole in the dirt below.

For conservation momentum must travel towards the North Pole in the northern hemisphere. That means the trough or ridge, the hose, will have to tilt more often to the left than to the right.

The speed of the southwest upper winds will be stronger than those in any other direction when this happens, thereby shooting the momentum northward. A visual demonstration of these concepts would make a good science project idea. This ridge, as seen by the axis, has no tilt, meaning it is straight up and down. Plus it has no curvature. There is no momentum transfer northward or southward in this case.

Other momentum transfer mechanisms exist. If a curved line can summarize the trough or ridge, then it acts like a lens, focussing or defocusing the winds while simultaneously redirecting them. We call this confluence or difluence respectively.

The effect can be the same – keeping the conservation momentum needs to display by sending the high winds toward the pole and returning slower winds equator ward.

Tighter contour lines, which are more focussed, correspond to higher wind speeds and vice versa for curves that are more spread out. Consequently, looking at increasing or decreasing wind speed observed data on both sides of the ridge or trough can give the same kind of insight.

Southward anti-conservation momentum transport, which defies conservation and is less common, sometimes goes hand-in-hand with sudden changes in weather. One such case, a digging trough can lead to a sharp cold front with unusually stormy conditions and continued cold afterwards.

Also, if you think about it, it would make sense that a low-pressure area would form near the end of the trough, a low pressure line. This is where the stronger winds blow away from, leaving a partial vacuum behind.

Bent troughs can also mean poleward momentum transport near one part of the trough and tropic-bound anti-conservation-of-momentum transport elsewhere at the same time. This often leads to a local build-up or deficiency in westward momentum that can then result in the creation or destruction of jet streams and fronts. What's more? If a deficiency becomes strong enough, streams can decouple and one or more new centres of high and/or low pressure can form between them. This rock in the stream gets called a block, such as an Omega Block, where the flow around takes on the shape of the Greek letter Omega, like a country road on your mountain vacation looping around a large obstacle such as a lake.

When this happens, the inherent conservation momentum shows can make it take seemingly forever for things to get moving again and regions find themselves trapped in long periods of steady and even unusual weather. Then we hear things like…

I sure hope this cold snap lets up

But you never hear anyone complaining about atmospheric momentum. Do you? Go back from Conservation Momentum to the Chasing Storms web page.