To give us the live picture satellite illustration we see on news programs, many scientific fundamentals operate together. On this map weather satellite simulations show us moving clouds and such. 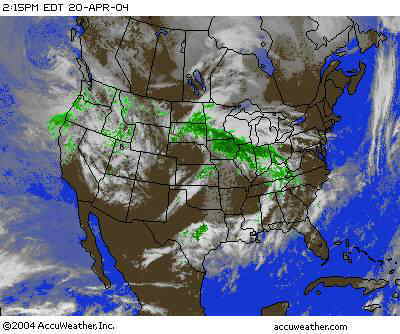 The following physical science articles say why the technology is so complex.

Physics tip #2 - Each body emits a range (spectrum) of wavelengths, which are used in many satellite animations.

Physics tip #3 - There is one peak wavelength that an object radiates stronger than all others. And one wavelength dominates each pixel in the satellite images. That wavelength depends on the object's temperature.

Physics tip #4 - Most items reflect light and other radiation that comes from elsewhere and strikes them.

Physics tip #5 - Bodies also block radiation, absorb light and other energies and create shadows. Nevertheless, they usually let some wavelengths through; each barrier is different.

Here is an interesting video on the limits of temperature and radiation.

Let your own light shine. If you write scientific articles and need to publish, why not create your own web site business like this one? You can even enrol subscribers as you create your own electronic magazine.

Generally speaking, the higher the radiating object's temperature, the smaller the most prominent wavelength. The hot sun temperatures, at thousands of degrees, give off a broad range of light spectrum wavelengths with a peak intensity at around half of one-millionth of a metre about 0.5 µm. 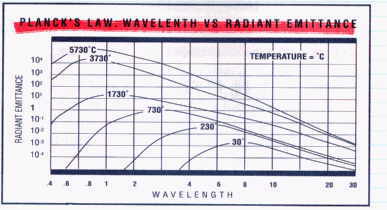 At the same time the earth's temperature ranges from 50 below or less to the hot desert temperatures of 100°F/40°C and above. These parts of the earth emit radiation with longer wavelengths peaking around 11 µm.

Live picture satellites are equipped with devices to measure both ranges. Visible sensors look at sunlight reflected by the surface and clouds while infra-red IR antennas give us a satellite picture from space using infra-red light, including those emanating upward from clouds.

We then get detailed cloud photos, moving cloud pictures and specialty cloud pics. Not bad for a little device way up in space.

The atmosphere lets the sun's radiation through readily, but naturally blocks various wavelengths of the earth's outgoing radiation. This phenomenon has been misnamed the green house effect reportedly leading to global warming and has been increasing due to the burning of wood, paper and fuels as well as other atmospheric emissions.

Therefore, live picture satellite technology detects radiation escaping through these window regions, wavelengths such as those near 11 µm which are not stopped by the atmosphere.

Because computers can assign temperature conversions to each IR intensity and create a comprehensive picture, satellite imagery becomes good for identifying clouds.

Also if a camera designed to detect 6.7 µm is used, it shows where water vapour is present. Water vapour absorbs this wavelength.