This Alberta map gives you all the Alberta Canada weather you probably need. How do you use this data to get forecast info? First click on the map below, then on any community shown on the Environment Canada Alberta weather page that pops up, OR select your town from the lower box. The upper box lets you pick another province.

Each city-page provides you with current temperature and other information, plus forecasts for the next 5 days. Weather warnings currently in effect will show in red across the top of the page. If you have cable TV or satellite, you can always tune into the Weather Network to get their forecasts as well, usually with video and greater detail. If you compare, you'll find the TWN forecasts similar but not identical to the predictions provided by Environment Canada.

No computer handy, but a telephone or a radio. 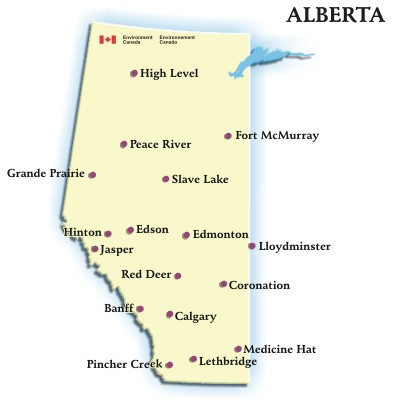 Also, the Emergency Public Warning Systems exist to send out warnings regarding weather and other hazards. Things such as floods, fires, toxic spills, contamination or terrorism.

Check this link for more about the Environment Canada weather warning page.  Do you use any of these technologies for your weather?

Can you do it better?

You like this Idea? It works for its intended purpose, but probably is not perfect. Why not?

Do you know of a better one? We'd all like to see it, I'll bet. A penny for your thoughts.

Other people and their ideas...

Click below to see hi-tech contributions from other visitors to this page...

Can you have chinook winds in summer? My son in grade 4 had a test and his definition of a chinook was "A wind that blows that makes the weather warm" …

Weather and technology Not rated yet
Set up an online radio station so people can hear what's going on at any time. If there is a tornado producing cloud, just talk about that. Barry's …

Stuff in the air - How about Weather Please? Not rated yet
The included information for StuffInTheAir.com is very thorough and offers the reader a great deal of information on the weather in Alberta, Canada. There …

weather Not rated yet
Automated weather forecast is a very good idea. The machines have always been able to calculate, with a higher speed, and greater accuracy than people. …

Alberta weather radio (AWR) Not rated yet
Alberta is a nice place to visit and like to stay there if I get a chance to do that. Many of the people still have the habit of using radio. For those …

been to Alberta Not rated yet
Hy, I am Filip. I have never ever been to Alberta or anywhere in Canada, but I am a big fan of Canada, especially Canadian hockey teams. At my place, …

Straight out of the Alberta map

This Songwriter - Moe Berg, and this musician (me).

Like it? There are many more on the Youtube channel I created. And now for the weather ...

Ever heard of an Alberta Clipper?

This winter storm, although it originates somewhere on the Alberta map, quickly moves towards the east or southeast and may deposit moderate to great amounts of snow as far away as the Eastern Seaboard. Usually, one of these storms starts off as a fresh descendant of an aging Pacific storm after it crosses the BC mountains. A distinguishing characteristic of this kind of system is its speed across and out of the Alberta map, its wind speeds and sudden temperature fall-rates.  It often scoots out of Alberta before it has dropped any precipitation.

Alberta and weather - they almost go hand-in-hand. If the air quality in Alberta, Saskatchewan and Manitoba is important to you, have a look at this short Environment Canada article.

With the Environment Canada weather map for Alberta, you can select your city or town to get the latest weather forecast.