Example of mathematics used in meteorology 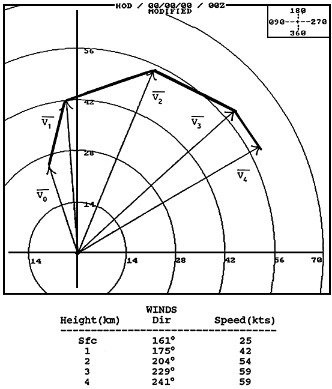 You may ask, "what about the mathematics used in meteorology?" Many people have wondered how math relates to meteorology.

Do you need to be skillful in mathematics in meteorology? It can't hurt - that's for sure.

Technologies used in meteorology depend greatly on mathematical principles as well as physics.  Examples include weather radar, chart usage and interpretation (such as the hodograph shown on the right) and numerical weather prediction.

Meteorologists study the atmosphere. They examine and attempt to predict the weather and the effects of air pollution, amongst other atmospheric wonders.

We also use instruments to measure wind speed and direction, temperature, pressure and humidity. Then, scientific theory helps us understand how these various quantities, sometimes called fields, interact with each other. And how the variables change in time and space.

A mathematical variable is an unspecified quantity able to accept different values under different conditions.

In math, we use the letters x and y for most problems. They are symbols representing variables, to which mathematicians use the circumstances of the problem either to determine or assign specific values.

Variables for the mathematics used in meteorology include:

Because meteorology is a three-dimensional science, four if you include time, the mathematics used in meteorology can require extensive use of partial derivatives. What's that? Partial derivatives allow you to look at how something such as wind speed changes when you move in one direction onlyonly, say, straight north. This could be important to pilots. They also let us determine the gradient of a field. That is, to identify what direction to move in order to see the greatest temperature increase, for instance. And even how much it increases after you go a certain distance in that direction.

The mathematics used in meteorology could, and does, fill textbooks quite extensively. A couple of good starter titles are Atmospheric Science - An Introductory Survey by Wallace and Hobbs as well as An Introduction to Dynamic Meteorology by James R. Holton. Go Nuts!

I just about did.

Many of the equations in the texts rely on balancing physical properties, such as in a centripetal force equation. Then each of the forces may be defined by products and derivatives of other parameters, usually. Then they are strung along as terms added together, each a component of the net force in this example. This is not always the case, but often enough.

Which other related fields of study borrow from the same set of mathematical principals? Atmospheric physics, climatology, hydrology and atmospheric chemistry. 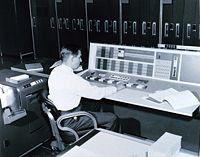 What's math without a few computers? Weather Prediction by Numerical Process by Lewis Fry Richardson came out in 1922. It said we could simplify the mathematics used in meteorology and, instead of these equations, look at small parametric changes with respect to small physical motions. We could reduce the complex principles to simple algebra.

But it was labour intensive. He also predicted that 64000 people would be needed to make the calculations needed for predicting the world's weather using this primitive method. Also, his results were quite poor.

Little did he know about computers to be invented just a few decades later. They would really help with the mathematics used in meteorology. With these new machines and a few major refinements in the theory, numerical forecasts became a reality in the early 1950's.

And they have improved, believe it or not, in the several decades following that. We now rely on the models extensively. That's because they have incorporated things like chaos theory and can give ensemble forecasts, which allow for changing probabilities and small statistical variations giving very different results.

It just keeps getting better. Thanks to the mathematics used in meteorology.

We are NOT Geeks

At least that's what some people think. Do you think math helps us to understand our world? Succeed at work? Use a computer?

You bet. That reminds me, it can help make you a better gambler if you're so inclined.

What's the most important thing math helps you with?

What Other Great Mathemeticians Have Said...

Trace directly from Storm B to A to C; then To Sitorm D to F to E; then to Storm G and out over Lake Michigan; then to Storm J to K to L and finally M. …

Math is very helpful in school. Of course it helps me in Algebra, but it also helps me in other classes. Like in Science. The teacher tells us the …

HOW DO ONE DRAW A WIND ROS AND what is the function of these wind diagrams? Barry's Response - Kelvin: A wind rose is a plot that shows a breakdown …

I have a new hydrology consulting idea. I am a civil engineer specializing in computer modeling of hydrologic phenomena. My primary interest is in finding …

why maths Not rated yet
I really want to be a meteorologist but the fact is i am very bad at mathematics and i cant murder myself to do pure maths Barry: short for mathematics …

We all use math everyday Not rated yet
People don't realize how often math comes up on a daily basis. Not just by making calculations but logical reasoning. I was in a map analysis class and …

Examples of the mathematics used in meteorology.